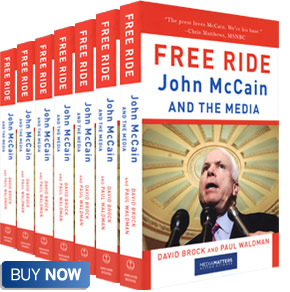 We live in a "gotcha" media culture that revels in exposing the foibles and hypocrisies of our politicians. But one politician manages to escape this treatment, getting the benefit of the doubt and a positive spin for nearly everything he does: John McCain. Even during his temporary decline in popularity in 2007, the media continued to bolster him by lamenting his fate rather than criticizing the flip-flops and politicking that undermined his media-driven image as a "straight talker."

In Free Ride: John McCain and the Media, David Brock and Paul Waldman show how the media have enabled McCain's rise from the Keating Five savings-and-loan scandal to the underdog hero of the 2000 primaries to his roller-coaster run for the 2008 nomination. They illuminate how the press falls for McCain's "straight talk" and how the Arizona senator gets away with inconsistencies and misrepresentations for which the media skewer other politicians.

Many may have forgotten by now that the Iowa contest was actually won by Mike Huckabee, but the media proclaimed McCain -- who came in fourth place, with 13 percent of the vote -- as the actual winner. "A fantastic night for John McCain," said the Politico's Mike Allen. Tim Russert immediately booked McCain, and not Huckabee (or second-place finisher Mitt Romney, or third-place finisher Fred Thompson), to be the guest on that Sunday's Meet the Press. Matthews seemed to sum up the media's thoughts about the senator in a January 28 interview: "Senator McCain, you know you're in my heart."

Find out more on how the media covered John McCain and the topics of immigration, negative campaigning, and his controversial endorsements compared to other candidates.

The media is particularly fond of the myth that John McCain is the senatorial thorn in the side of Washington lobbyists. This myth is pervasive and it suggests that McCain is the "maverick, moderate reformer" that he claims to be. Despite all of his posturing, McCain's 2008 presidential campaign is rife with lobbyist connections.

Not only does the McCain campaign have more current and former lobbyist bundlers than any other candidate, but McCain has more current and former lobbyists working on his campaign staff than any other candidate in the 2008 presidential election. Media Matters for America has previously catalogued the extensive number of lobbyists and their deep connections to industries, such as the communications industry, which McCain oversaw as chair of the Senate Commerce Committee.

The "Media Myths of McCain" detail the truths hiding benneth the surface of the media's coverage of John McCain. From his supposed status as a "maverick" and "straight talker" to his supposed independence from lobbyists, this site details the real John McCain seldomly portrayed in the media landscape. Taken together, these myths show just how big of a Free Ride the Arizona Senator has received from the media over the years.

Nobody is supposed to be a greater adversary to the lobbyists who prowl the halls of Congress looking for special interest handouts than John McCain. But all it takes is a look at his campaign staff list to puncture that myth.

The media have long perpetuated a myth of John McCain as the bane of Washington lobbyists. It is just that -- a myth. Even before his current campaign, the senator reached out to lobbyists in preparation for his run. A March 8, 2006, story in The Hill reported that "lobbyists say that McCain has been reaching out to K Street to strengthen his national fundraising network." A February 3, 2007, National Journal article by Peter H. Stone and James A. Barnes reported that McCain and Mitt Romney are "working overtime to line up influential allies on K Street who can deliver supporters and campaign cash." The article reported that on "January 22, David Girard-diCarlo, the chairman of Blank Rome, which is headquartered in Pennsylvania, escorted McCain to Pittsburgh and Harrisburg to meet with influential donors and fundraisers. And on January 31, the senator attended a Capitol Hill luncheon at the Monocle restaurant that drew two dozen trade association leaders and potential allies."

According to Public Citizen, McCain's campaign has more current and former lobbyist bundlers -- lobbyists who raise money by pooling donations from themselves and others -- than any other candidate. According to Thomas Edsall, a former Washington Post reporter and political editor of The Huffington Post, McCain "has more lobbyists working on his staff or as advisers than any of his competitors, Republican or Democrat." And a study by Media Matters for America has also found numerous McCain staffers or advisers who were registered to lobby Congress as of year-end 2007 or were previously lobbyists. The current or former lobbyists working for McCain include his campaign manager, his deputy campaign manager, his chief political adviser, his chief fundraiser, and the chief of staff of his Senate office.

Get the whole story.

What people are saying about Free Ride

Check back often for that latest news and blog coverage surrounding Free Ride: John McCain and the Media.

Free Ride in the news...

Free Ride on the blogs...

The video for this item requires a newer version of Flash Player. If you are unable to install flash you can download a QuickTime version of the video.

The Huffington Post: Free Ride: Inside the Media's Love Affair with McCain