While much attention was given to the trivial questions asked in the final debate of the 2008 primary season, the problems with the debates went much deeper and highlight some of the broader weaknesses in the news media's coverage of the presidential campaign.

Simply put, the primary debates were a disaster. With a few exceptions, the media figures who moderated the debates focused on endless rehashes of campaign gaffes, pointless dissections of political tactics, and issues of personality. As a result, critical issues were pushed aside.  In fact, the vast majority of questions had little or nothing to do with the challenges facing the country and our next president.

Republicans and Democrats were equally subject to the parade of silliness. When not being forced to name their favorite Bible verse or take sides between the Red Sox and the Yankees, candidates were asked to comment on polls or political strategy. While some candidates got more substantive questions than others, almost all the candidates who were near the top of the polls found themselves answering mostly trivial questions.

Debates are the best opportunity the public has to get an extended look at the candidates and to hear about their proposals. While the candidates are ordinarily filtered through news programs that typically reduce their speeches to six-second sound bites, a debate actually allows them to answer questions at length and exchange ideas with each other. But the degree to which debates do this is dependent on those who moderate them. Those moderators ask the questions and guide the discussion. If they are focused on trivia, the debates will be about trivial matters, and the public will be no better equipped to make an informed decision. 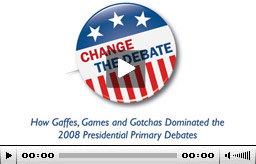 The presidential primary debates focused on campaign gaffes, political tactics, and personal issues and, as a result, critical issues were pushed aside.

Tell them to Change the Debate.