Swiftboating 2.0: The thematic structure of the right-wing smear campaign against Barack Obama

As the means of communication have evolved, presidential campaigns have grown increasingly multifaceted, with each election featuring layers of complexity that were not present four years before. The most striking feature of the 2008 election may be the sheer volume and variation of the attacks being directed at Sen. Barack Obama. Though they come from many sources, arrive through a variety of media, and cover a wide range of subjects, a close examination reveals a unified thematic structure to these attacks. 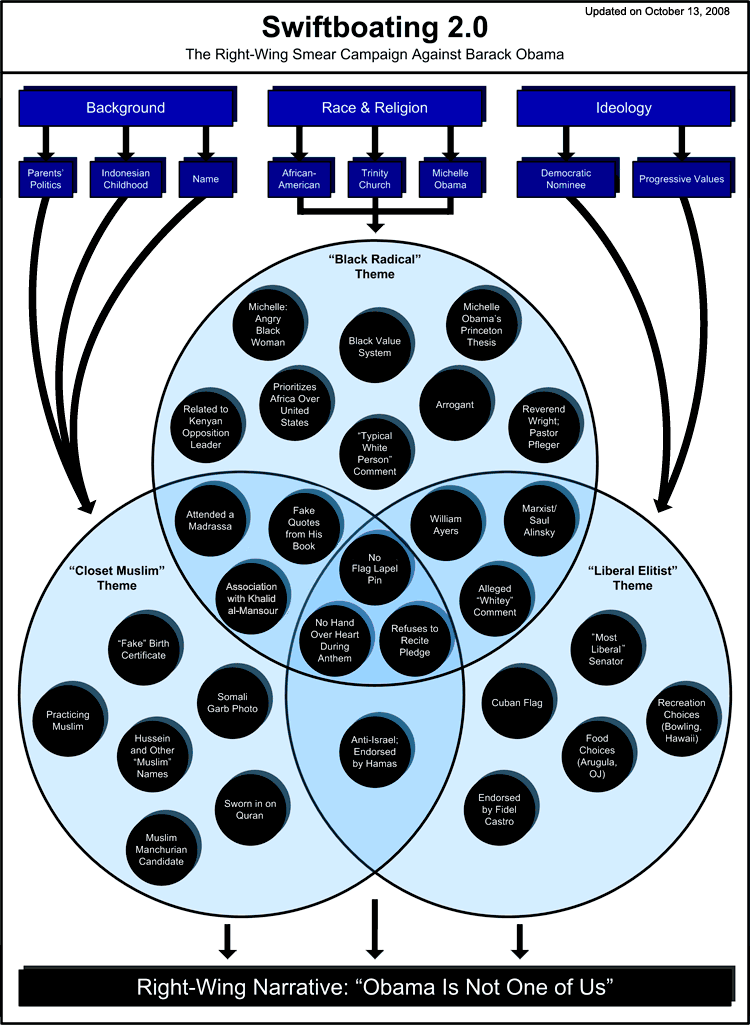 Click on each bubble for more information.
Text only version.

As has been extensively documented, many of the criticisms Obama has faced are based on outright falsehoods. The truth is that he is a Christian, not a Muslim; he was born in the United States; he doesn't refuse to recite the Pledge of Allegiance; he wasn't endorsed by Fidel Castro; and so on. Other attacks are outrageous distortions with a kernel of truth at their core.

The diagram below shows how the seemingly disconnected attacks on Obama all drive in a similar direction. Each begins with some aspect of Obama's history, family, personal characteristics, or beliefs. The attack then moves to one of three broad themes: that Obama is a Muslim or somehow foreign; that he represents a black radicalism more at home in the 1960s than today; or that he is a liberal elitist with a radical, even socialist agenda.

Some of the attacks touch on two or even all three of these themes, which is why they are represented in a Venn diagram. But all the attacks ultimately point to the conclusion that Obama is "not one of us," as the expression goes -- not Christian, not white, not mainstream, not even American.

Just as the Swift Boat Veterans for Truth unleashed on the public a dossier of lies about John Kerry in 2004, this new campaign is on a mission to spread misinformation about a presidential candidate. We call it "Swiftboating 2.0" not only because it is the latest model of a political smear campaign, but also because it shares features of "Web 2.0" sites like Facebook and MySpace: significant portions of the content are generated by ordinary people and are spread from peer to peer. Swiftboating 2.0 combines these new information pathways with traditional media -- books from conservative publishers, right-wing radio, and conservative pundits and strategists on television -- to spread the smears as widely as possible and force them into the mainstream media.

To understand the attacks on Obama, one must acknowledge that they operate together, as one coherent, thematically unified campaign: Swiftboating 2.0.